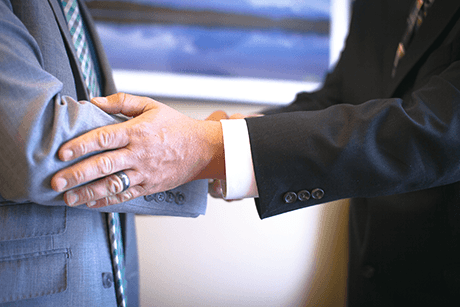 Our reliable Polk County commercial and business litigation attorneys handle every type of business dispute with strategy to aid in your business needs.

In this video, our Polk County commercial litigation attorneys explain how Motion for Summary Judgment can seem like a convoluted process at first, but it really boils down to three parts.

In this episode, our Polk County attorney will discuss Motions​ for Summary​ Judgments​ in Iowa.

In this video, our Polk County commercial litigation attorneys explain Iowa motions to dismiss. A lawsuit is initiated in Iowa by the Plaintiff filing an official complaint, which is a set of facts sufficient to bring forth legal action in order to obtain property, money, or enforcement of a right against another party, this is also known as a Cause of Action and refers to the reason the suit is being brought forward (IE battery, breach of contract, etc, etc.) The complaint basically puts in writing the allegations in the case that entitles the plaintiff to a claim against the defendant. Once a complaint is filed the defendant can file an Answer, which is the official response denying or admitting to the allegations put forth by the plaintiff. The Answer also raises any affirmative defenses that would go against and defeat the allegations. Alternatively, the motion to dismiss can be filed by the defendant. The motion to dismiss suggests that there is a defect in the Complaint or some other affirmative matter, requiring the court to consider dismissing the case.

In this episode, our Polk County attorney will discuss motions to dismiss in Iowa and the specifics surrounding the process and the other Motions that come into play when a motion to dismiss is brought forward.

In this video, our Polk County commercial litigation attorneys explain canceling a contract after it’s been signed, the FTC’s “three-day rule,” and how the ability to cancel depends on the industry or item being sold. For purchases above $25 made in the home or at your place of work, you have the right to cancel the contract within three business days as long as the transactions are purchased, leased or rented primarily for personal, family or household reasons. “Buying clubs” are membership groups that allow you to buy certain goods and services at a discount. The three-day policy should apply to all types of buying clubs. Suffice to say, be cautious and read the contract thoroughly with any business opportunity. In Iowa, the three-day cancellation period also covers the sale of a business opportunity regardless of the location where the sale took place. The business opportunity must include an initial investment of $500 or more and the seller must agree to provide the materials, goods, education, etc that the buyer needs to start the business, as well as follow Iowa law with regard to business opportunities and franchises.

In this episode, our Polk County attorney will discuss motions to dismiss in Iowa and the specifics surrounding the process and the other Motions that come into play when a motion to dismiss is brought forward.

What Constitutes Negligent Hiring and Employer Liability in Iowa?